When I first moved to Georgia, I knew I would miss some things about New England, the smell of crisp fall leaves, snow, my family, the house I grew up in. You know, all the stuff you're supposed to miss.  Turns out, much of that was over rated! I don't miss snow at all!  Especially slush puddles that hide near your car door, waiting to leap into your dress shoes at the first opportunity.  I don't miss I-95 and it's potholes one bit. The beach, eh, it was ok but I'm far too fair skinned to really need to be there frequently.  Plus, sand is scratchy.

What has taken me by surprise over the years is the stuff I never thought I'd miss, but realize when I see it again that I missed it terribly!  Saltbox houses and old barns with fields surrounded by endless stone walls rank high on this list.  Another top contender- Pickles.  Pickles, like biscuits, spaghetti sauce, pizza and other regional specialties and family recipes are one of those things that you develop a taste for as a kid and spend the rest of your life trying to find the recipe that tastes just like Mom's, or just like Vinnie's or just like what you had when you were 8.  When you relocate to a different part of the country, it's even harder to find something that is at least, close enough.  In Atlanta, I can find over a dozen kinds of pickles, none of them are the fat, crunch, kosher half sour pickles my dad used to fish out of the barrel at the Hickory Farms store in the mall and share with me as we waited on my mom to finish shopping. I didn't even realize how much I loved those pickles until I went without them for so long!

Shortly before my wedding, a little bagel shop opened up in my college town. They got terrible reviews. The bagels were hard, leathery, impossible to chew.  The toppings were odd, What's a lox?  They were AWESOME!  They were exactly like the bagels we'd buy in Grand Central Station and eat for the entire half hour it would take us to get home on the train!  The locals here were used to squishy Lenders bagels from the grocery store. They had no idea! Soon-to-be-hubby and I ate there one day and he ordered a sandwich. It came with a pickle wedge that he offered to me. Expecting the typical vinegary dill pickle, I was at first surprised by the salty, garlic deliciousness that I tasted.  Then I realized what I had!  My eyes widened and I started to clap my hands and stomp my feet. I think I made audible YUMMY noises. Hubby thought I was having a stroke. I handed him the pickle and told him to try it.  He did and he made a face and said it tasted weird.  I ran to the counter and asked if I could buy more pickles.  A very confused clerk said "Um, no, they aren't for sale. The owner has them flown in every week from New York." She thought they tasted weird too. She said most people try them and throw them out!  Oh my, what a waste of good pickles!  Sadly, but not unexpectedly, the bagel shop didn't last and my small lifeline to half sour pickles was gone. I could never find them in a store and any reference to home pickle making I could find in the library was only for vinegar pickles. Half sour pickles are not 'pickled' in the 'soaked in vinegar' sense of the word, but rather are fermented in brine so they aren't listed in typical canning and storing type cookbooks.  So sad. I gave up on finding those pickles again.

Fortunately, a few years later this nifty research tool became available...the internet!  I found several recipe variations to my beloved half sours and tried a few. As I decided what I did and didn't like about each, I tweaked the recipes into one.  This is the one I use. 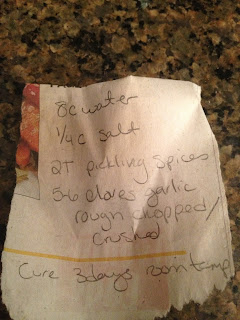 And these are the things you need- A pitcher of room temperature water, a box of salt, pickling spices, garlic, a jar to ferment the pickles in and some cucumbers. If I was a more organized blogger, all of those things would be in the picture :) 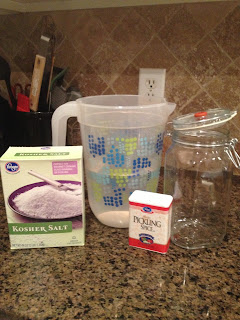 Rinse the cucumbers in cool water. Nothing special here, you just want to rinse off any loose dirt. Pickling cukes will work best, but since they only soak for a sort time, larger salad type cukes will work too but the end result will be softer than the smaller, pickling variety. 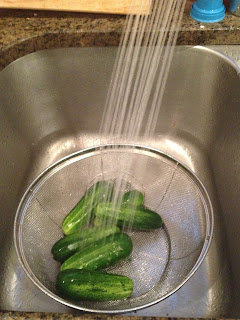 Dissolve 1/4c of salt (pickling, kosher, coarse, ice cream, whatever is cheapest.) into 8 cups of room temperature water.  If you want to be super special, let the water sit out overnight to let the chlorine dissipate, or use filtered water. All those goodies they put in the water is to kill bacteria, and we're trying to grown bacteria so getting them out helps the process happen faster. For the same reason, hot or cold water can slow fermentation, just go with room temp. 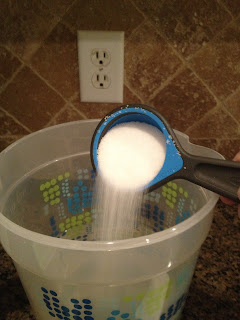 Put your spices (2T) and garlic (5-6 cloves) into the container you're going to use to ferment the pickles. Normally, I use fresh garlic, peeled and smashed with the side of a knife, but I was all out and I really wanted pickles so I used the oil packed. Also, these are just store brand pickling spices. I think these have too much clove so I just pick out about 2/3 of them before adding to the container. If you absolutely must have DILL in your pickles, add a spring or two of fresh, whole dill now. Don't use the really fine, powdery,  dried stuff, or if you have to, put it in a muslin bag first so it doesn't stick to the pickles. 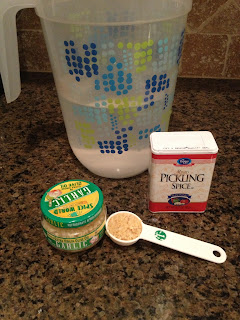 Cut the blossom ends off the pickles. I hate biting into a bit of stem so I cut off the stem ends as well. This also makes them fit nicely in the jar!  This is the time to decide if you want whole pickles, or slices or wedges. Cut them however you want them.  Whole will stay crisp longer but if I know I'm going to use them up fast, I sometimes cut them in 4ths. 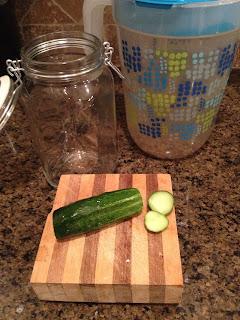 Goof alert! I usually mix all my brine and spices into a large crock (below) so I threw everything into the pitcher for this tutorial.  This was my first run with these smaller jars and I didn't use all the brine, leaving me to scoop and scrape the garlic out of the pitcher and into the jar after the fact. You can see the spices in the brine in the pitcher. Ignore that, put your spices in the jar!  The smaller jar probably would have been fine with half the spices and garlic, but having twice as much didn't hurt.  Luckily, we love garlic in our house! If you don't have a mason jar or a big crock, any large plastic or glass container will work, a big cookie jar, or a food grade bucket from a fast food joint. A wide top is useful, so you can more easily submerge the cucumbers. This glass crock was under $10. I think it came from Old Time Pottery or Garden Ridge. 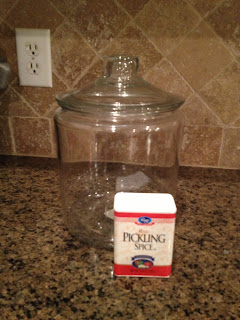 Pack the cucumbers into the jar. It helps if you can wedge them in enough that they don't float around too much, but you want them loose enough that the brine can get in and around all the cukes. 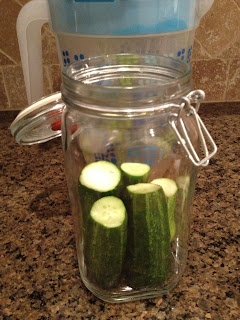 Right before my craving for pickles, my hubby bought a set of "Pickl-it" fermenting jars. I figured this was a great opportunity to try them out. They come with a glass dunk'r, to hold the food under the brine (visible below) and a nifty airlock to keep anything unwanted out of the jar, including oxygen, while allowing fermentation gasses to bubble off.  In the past, I've had issues with yeast or other less desirable things growing in my pickles, with the pickl-it airlock, I had none of that!  (and they didn't pay me to say that, or give me swag...though I'm not opposed to swag!)

Pour the brine over the cucumbers, covering completely. If you don't have these fancy jars, you can use a smaller dish to hold the cukes down, or a baggie filled with brine.  In my big crock above, I use a plastic needlepoint mesh cut to fit just inside the top, with a small plate or ramekin perched on top of it to hold it all down. 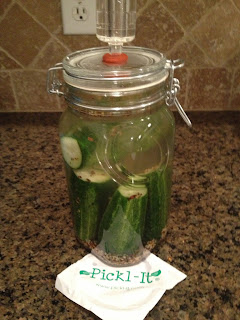 Leave your jar in a room temperature place, out of direct sunlight and away from extreme temperatures, for at least 3 days. The water will get cloudy, even downright murky!  There will be little bubbles. There may even be mold on top. If so, just scoop it off with a spoon. If you aren't used to fermenting your own food, it may look a little scary.  I promise you, it's ok!  These pickles are actually quite good for you!  They do wonders for your intestinal flora!  If you're scared, you can read up at the extension service, or any of the MANY internet sources about fermented foods to be sure you're doing it right. If you're not sure, or the whole thing looks like it's gone way off, or smells way off, by all means toss them and start over. This is supposed to be fun, not give you a belly ache! 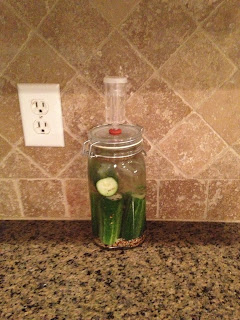 After 3 days, move the jar to the fridge. (with the pickl-it, you can remove the airlock and put in the rubber stopper) Give the new pickles a little time to get cold, then dig in!  There are no more pictures because this batch didn't last long enough!  Once they hit the fridge, hubby, who has since developed a taste for the briny beauties, and I devoured them. You can let them sit longer, and they will get more and more sour. In a week or 2, depending on the weather, you'll have full sour pickles.  This is another reason these are so hard to find, the shelf life is so short! Both hubby and a dear friend of mine who knew my plight eventually found a commercial jarred half sour pickle, but they only pop up in stores briefly and then are gone again. It's easier to just make your own!

Do you have a favorite kind of pickle?  Is there a recipe that you grew up with that you've been trying to replicate as an adult?
Posted by GoodJoan at 3:06 AM

Email ThisBlogThis!Share to TwitterShare to FacebookShare to Pinterest
Labels: askgoodjoan